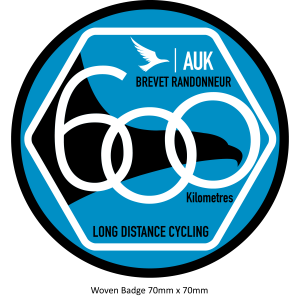 The event is a randonnee, not a race. Those taking part will have a maximum of 40-hours to complete the challenging 612 km route.

The Pendle 600 is renowned for it’s challenging route and competes alongside other AUDAX 600s for the UKs toughest 600.

The Pendle 600 counts as a 600 km qualifying ride for the forthcoming Paris-Brest-Paris 1200 km randonnee.

The route is essentially an anti-clockwise circuit around northern England passing through several National Parks including: Yorkshire Dales; North Yorkshire Moors and the Lake District, as well as many areas of outstanding natural beauty throughout the Pennine chain. It’s a 612 km route with a predicted 10150 metres of climbing, passing through 5 counties, and visiting both the east and west coast.

This event crosses some wild and exposed mountain roads, climbing above the 500 m contour on several occasions. The route uses all types of roads; from narrow lanes with steep ascents/descents with some poor road surfaces, to A + B-roads including some – not many – dual-carriageways.

Event HQ is Pendleton village hall. Limited free parking will be available near the event start for the duration of the event on a first come – first served basis!

After leaving Lancashire, the route heads off in a north-easterly direction, passing through the southern tip of the Ribble Valley and on into the Yorkshire Dales.

This is where the riders encounter the first serious climbing of the ride between Grassington and Ripon.

Many riders commented that this was amongst some of the toughest riding they’ve ever done!

This is the shortest stage of the route.

After the initial North Yorks’ Moors climbs are out of the way there’s a more gentle run to Stokesley.

This is the easiest stage of the route, using mainly A-roads passing Darlington.

The route then takes the A67 to Barnard Castle.

On this stage, the riders climb up into the northern Pennines following mainly B-roads.

Several roads climb above the 500 metre contour with a mixture of both gradual inclines and short, steep, ascents.

For most, this will be the night-section following primarily the A686.

The road is lumpy to Alston, soon after the riders climb to the highest elevation on the route of 580 m/1903 ft at the summit of Hartside Pass.

The route now heads into the Lake District following primarily A-roads to Keswick before climbing over both Whinlatter Pass and Cold Fell on the way to the west coast.

Most riders end up in Pudding Lane Cafe at Seascale, overlooking the sea.

This is the most feared stage of the route as it contains the headline climb of the ride – Hardknott Pass – which comes after about 20 km into the stage. The climb is viewed by many to be the toughest climb in the country. The road rises to nearly 400 m elevation in about 2½ miles, with a gradient exceeding 30%.

After passing through the Lakeland towns of Ambleside and Windermere, the route follows a pretty main road down to Milnthorpe and then the A6 to Carnforth.

Jubille, and the Trough of Bowland are the last major climbs of the ride.

This event is held under Audax UK regulations. The organiser is only responsible for route and time checks.

As with any other cycling event, the route uses all types of roads; from narrow lanes with steep ascents and descents, often with poor road surfaces, and A + B roads, where you’re likely to encounter wandering sheep; cattle and other livestock.

HOW TO GET TO THE START

Pendleton is situated about 0.5 miles south of the A59 in Lancashire, easily accessible by following signs.

Limited parking will be available in the adjacent car-park for the duration of the event. Please note the organiser is not responsible for your vehicle and/or their contents during the event.

There’s a railway station in nearby Clitheroe. However, be advised there are no trains on the morning of the event. Travellers arriving by train are advised to arrive the night before and book some accommodation somewhere (see below for further details about this).

There aren’t many hotels in and around Clitheroe. The nearest Premier Inn’s are Blackburn north-west, A59 (15-miles) and Burnley (15-miles). http://www.premierinn.com

There are 8-controls on the event. Riders should obtain a till receipt from any shop/cafe, or ATM slip out of a hole in t’ wall at every control except Langwathby – the night control (see below). All the controls provide the opportunity to purchase food and drink. All the controls are listed below:

The petrol station/Spar just north of the city market square as per route sheet is normally used.

Best is the Jet garage beside the roundabout as per route-sheet.

The BP petrol station by-passed on the way in is normally used, providing a tea/coffee machine. Plenty of take-aways and pizza places in the town centre.

The “pizza stop”. There aren’t many other places open in Hexham after midnight. If early enough, some riders opt for a slight detour off the route to the Tesco which closes at midnight.

You’ll have a choice of grabbing a till receipt from the petrol station or opting for a sit down in the Truckhaven, which serves food. Truckhaven is open Sunday 07:00 am – 11:00 pm.

Basic sleeping facilities will be available at the Langwathby control at 392 km. This will be in the form of airbeds in a quiet back room.

A shower is available at the Langwathby control. Towels will be provided.

A bag drop to Langwathby control is included in the entry fee. Please ensure your drop bag contains:

Your drop bag will be returned to the finish control for you to collect on Sunday!

The finish control will be open from about 3:00 pm (Sunday) onwards. Refreshments, typically sandwiches and cakes along with tea/coffee will be available at the finish.

No rider will be credited with a finishing time under 20-hours, 24 minutes!

N.B. entry fees are non-transferable; non-refundable and will be taken at the time of entry! The entry fee won’t fluctuate during the course that entries remain open!

Your confirmation email, usually received from PayPal immediately after entering and paying the entry fee, guarantees you a place on the event! Online entrants will also usually receive e-mail confirmation of their entry from the organiser’s within 72-hours of entering!

The inaugural Pendle 600 took place over the weekend of 02 – 03 June 2012. Many people will remember this as the “Jubilee Weekend”.

The ride began with some very pleasant early morning riding along the A59 before the riders encountered the first big (ish) climbs of the route whilst passing through the Yorkshire Dales. The next stretch took the riders over the North Yorks’ Moors, up and down 1:3 handlebar bending grades before the riders controlled at Robin Hood’s Bay, overlooking the sea!

With the North Yorkshire Moors now out of the way, the next stretch along Teesside was welcomed by most riders as the easier run along main roads provided the riders the chance to make up some time before the route turned north into the northern Pennines, climbing over the 500m contour on several occasions.

The stretch along the A686 over Hartside Pass – at 580m the highest elevation on the route – was a night-ride for the riders. By the time of the Seascale control at about 300-miles, most riders were exhausted with still the headline climbs of the ride to come: Hardkn*tt and Wryn*se passes!

The final stretch over the Trough of Bowland provided the riders with an exhilirating ride along the river to the finish.

Riders travelled from as far as Oxfordshire; Buckinghamshire; London and Scotland to participate.

A strong westerly wind blew the riders out to the coast at Robin Hood’s Bay, again climbing over the North Yorkshire Moors to the east coast.

The riders then turned into a fierce headwind (the headwind would play havoc all the way across country to the west coast), before climbing north into the northern Pennines, where the wind and driving rain made the night-time Hartside pass crossing almost a survival battle.

Fortunately, they were all assured of a warm welcome at the Langwathby night (or in some cases morning) control before venturing out into the early morning drizzle to tackle the Lake District.

After the west coast, Hardknott & Wrynose Passes were conquered by most riders and all surviving riders went onto finish.

Riders travelled from as far as London; Bristol; Surrey and Wales in order to participate in the event and I do hope their journey’s and expense was worthwhile!

Each and every rider had their own epic story to tell, and many of the links to their blogs can be found below.

Furthermore, Damon Peacock kindly filmed some of the 2013 event and you can view his 17-minute film from youtube below:

The third running of the Pendle 600 was held over the weekend of 13-14 June 2015. The event counted as a 600 km qualifying ride for Paris-Brest-Paris, and was the last to start in the village of Pendleton.

Most of the riders set off in the rain although the weather improved as the riders climbed over the north Yorkshire Moors on their way to the east coast. Justin Jones became the only rider to complete all three editions, whilst several riders completed back to back 600s (ie – ridden a 600 the previous weekend). Cathy Brown became the first ever female finisher whilst Stuart Blofeld attempted the route on an Elliptigo but unfortunately ran out of time after completing 561 km. Glenn Utteridge completed the event as his first ever Audax event, raising money for charity in the process.

The successful riders were as follows:

Riders travelled from as far as London; Hampshire; Cambridgeshire and Surrey in order to participate in the event.

37 riders started and 19 riders finished. Weather conditions were more favourable than previous years but with a higher DNF rate, blamed on the headwind from Robin Hood’s Bay all the way to Seascale.